The Arizona bark scorpion, Centruroides exilicauda, is found in Arizona and the greater Southwest, with their range extending into southern Utah, New Mexico, California, and Mexico. They are a pest species found frequently in homes and around landscaping, making both humans and pet encounters common in these regions. Suspected scorpion stings are sometimes seen in pet tortoises that live outside in Arizona, especially during the summer months. The bark scorpion is the only species of scorpion in North America that causes significant systemic effects in humans and pets due to a sting. 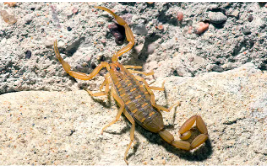 Bark scorpions are 2-3 inches in length, and typically yellow to light brown, but can also be striped in the mountainous regions. Scorpions are mainly nocturnal and tend to seek out dark quiet areas, hiding under rocks, plants, or planters; when found indoors, they are often inside shoes or things piled on the floor (clothes, bedding, etc.). Scorpions are not aggressive and do not sting unless they feel threatened or cornered.

Envenomation occurs due to a sting from the tail and not from a pinch or bite from the scorpion. Toxins in the venom affect the nervous system which lead to symptoms such as excessive salivation, respiratory signs, pain, swelling, tremoring, and paresis/weakness in limbs. The most commonly reported symptoms are bubbles from the nose or mouth, extended head, opening the mouth to breathe, twitching or jerky movements, and not wanting to move around. The amount of venom injected and the size of the tortoise affect the severity of signs, with smaller animals being more severely affected. Generally, envenomation is suspected based on clinical signs and/or finding a scorpion in the enclosure.

Treatment is mainly supportive and symptomatic aimed at decreasing oral and respiratory secretions, managing pain and nervous system signs, and ensuring proper nutritional and fluid support. Depending on the severity of signs, some tortoises may require a short stay in hospital for monitoring and continued management of neurologic symptoms. Signs generally resolve within 3-5 days, although anecdotal reports note that some individuals can take up to 2 weeks to return to normal. Prognosis is generally fair to good if treated; however severe systemic reactions can cause death especially in smaller animals. If you are concerned that your tortoise may have been stung, a visit to the veterinarian is warranted.

NOTE on the scorpion-specific antivenom that is used in human medicine for scorpion stings (Anascorp®, Alacramyn®). Studies done in dogs show that this treatment needs to be given within 20 minutes of envenomation to reverse systemic signs. Because of this, the expensive cost associated with keeping the antivenom on hand, and scarcity of the drug, it is rarely used in our veterinary patients; however, symptomatic treatment without antivenom has been shown to be successful in reversing signs and providing relief.

Supplies for your Reptiles and Amphibians

Did you know Arizona Exotics carries a complete line of products for your turtles and tortoises, geckos, iguanas and other reptiles? Check out our reptile and amphibian supplies here.