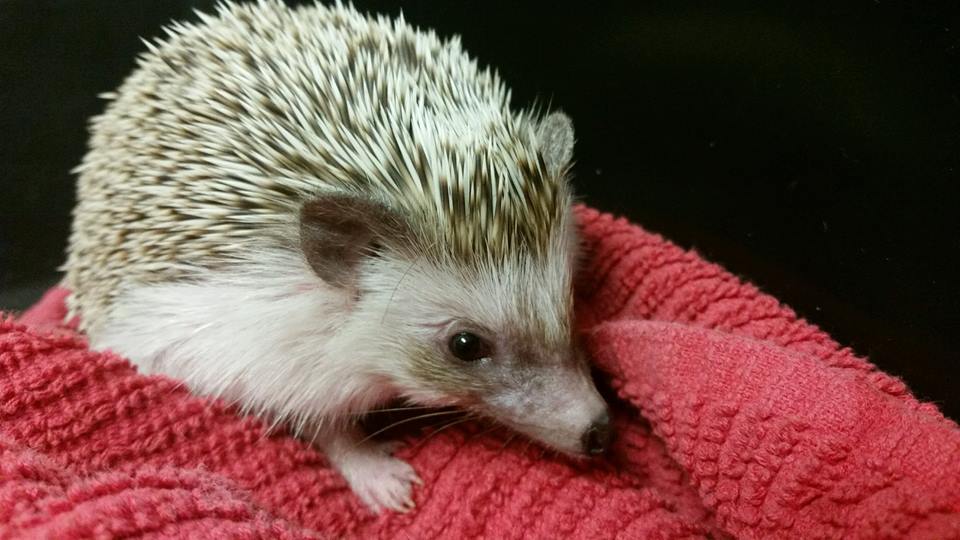 African Pygmy Hedgehogs or Four-toed hedgehogs are unique, nocturnal mammals related to shrews and moles. As of December 5, 2015, African Pygmy Hedgehogs have been removed from the restricted wildlife list in Arizona, and can be legally kept as pets. Legal restrictions vary from state; be sure to check with your local laws before pursuing ownership.

One of the African Pygmy Hedgehog's defining physical traits is its quills. Quills are modified hairs that cover most of hedgehog’s body. When rolled into a ball, these quills protect hedgehog’s undersides from predators or perceived threats. Contrary to popular belief, hedgehogs do not 'throw' or 'shoot' their quills, however just like normal fur they shed and regrow them.
Hedgehogs are best kept singly where tolerance of handling can vary amongst individuals. To encourage your hedgehog to become more accustomed to being handled and interacting, it is best to allow hedgehogs to unroll on their own and have slow deliberate movements. Offering treats at this time may help to associate you with positivity. Most hedgehogs do not enjoy being petted and respond by rolling tightly into a ball.
Another interesting behavior that hedgehogs exhibit when an interesting smelling object is found is called self-anointing. Self-anointing occurs when hedgehogs salivate excessively or foam after encountering an interesting smelling object and chew on that object. The mixture of their saliva and that object is then smeared over the hedgehog's body. Many studies exist for why hedgehogs perform and suggest that this behavior may be linked to scent camouflage, communication, to smearing toxic substances to protect from predators.

Hedgehogs are omnivores, consuming plants and insects. Despite popular belief, it is best to not feed cat food as a staple diet to hedgehogs. Cat diets are high in fats and animal proteins and lack an important component of insects called chitin. Chitin helps compose the exoskeleton of insects and is thought to act like fiber in the diet and promote digestive health. Hedgehogs are best fed 3-4 teaspoons of a diet consisting of insectivore kibble such as Mazuri Insectivore Diet. The diet can be supplemented with root vegetables and occasional insects like crickets and meal worms. Avoid high sugar foods, raw meats, and all dairy products. Hedgehogs are prone to obesity; make sure to measure your hedgehog’s food and consult your exotics veterinarian for any concerns regarding weight and health.

Hedgehogs need to be housed in a solid bottom cage that measures 5 sq. ft. Do not house them on wire bottomed cages as they will damage their feet and possibly fracture limbs. Paper based bedding, aspen wood shavings, or felt can be used for the bottom. In the wild, hedgehogs spend most of their time foraging for insects and roots. To replicate this in captivity, provide a solid, appropriately sized wheel for exercise in the enclosure. Most hedgehogs use their wheels regularly and often defecate on them. Open spaces can be stressful for hedgehogs, so provide them with several hiding opportunities like PVC tubes or boxes. Water should be available at all times either by using a water bottle and a ceramic dish.

Most hedgehogs are uncomfortable being picked up and can make picking them up uncomfortable for their owners. It is best to pick up your hedgehog with two hands. Gloves or a folded towel are best to protect against the quills. Allow your hedgehog to unroll itself on its own terms. Never attempt to unroll a hedgehog. Gentle, patient, and consistent handling will help to create a more social hedgehog.

Skin problems: Mites are somewhat common with hedgehogs and cause flaky skin, raggedy ear edges, and quills that fall out very easily. Fungus/ringworm can cause similar symptoms as well. Both mites and fungal problems can be treated so if poor skin health symptoms are noted they should be seen by a veterinarian.

Wobbly Hedgehog Syndrome is caused by a degenerative neuropathy in the spine. It causes hedgehogs to first appear wobbly like they are stumbling or falling over as they walk. Unfortunately it is progressive with no known treatment and eventually causes paralysis and death.

Cancer is very common in African Pygmy Hedgehogs and it is suspected that there is a genetic component to some of the many types of cancers that hedgehogs get. There can be lumps and bumps that arise in many areas of the body including internally, on the jaw, in the skin, and commonly the reproductive tract.