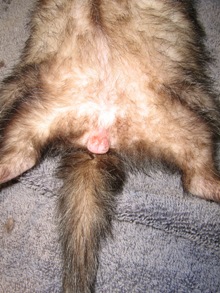 One or both of the adrenal glands may become hyperplastic(over-active) or develop tumors. The majority of ferrets have hyperplasia or benign tumors. Less frequently, adrenal gland cancer can occur.

Ferret with a swollen vulva due to adrenal disease complex is shown here on the left.

Medical management of adrenal gland hyperplasia with Deslorelin implants currently is the best recommended treatment with the longest survival.
Deslorelin: Deslorelin implants are currently the best way to treat adrenal gland disease caused by benign tumors or hyperplastic conditions in most ferrets. Studies have shown that desorelin implants are more effective at controlling adrenal disease than older surgical methods of removing the enlarged gland(s). Deslorelin implants do not require anesthesia and surgery and are therefore provide a much less expensive treatment for adrenal disease.  The implants control adrenal gland disease for 16-18 months on average. Most ferrets experience a complete resolution of abnormal signs and seem"back to normal" within 2 months. Ferrets can receive a 2nd implant when the first one stops working if they are still healthy. If you choose Deslorelin therapy for your ferret, a thorough examination and ultrasound exam to measure the adrenal glands is needed.
A progress exam and repeat ultrasound should be performed 1 month after implantation to assess response to treatment. If the tumor is getting smaller and there is good response to treatment, follow up exams and ultrasounds to measure adrenal gland size need to be repeated every 6 months. If no response to medical therapy occurs after 1 month, surgery should be considered.
Lupron: Lupron (leuprolide acetate) may be given as an injection once a month to control adrenal gland disease.    Some ferrets may do well with monthly Lupron alone, and some may do well with Lupron on a less frequent schedule.  Lupron is highly recommended as an immediate treatment to any male ferret with difficulty urinating and with any female ferret with a swollen vulva.
A progress exam should be performed in 1 month to assess response to Lupron treatment. If there is good response to treatment, Lupron should be administered monthly. Progress exams and ultrasounds to assess response to treatment and to monitor for other health problems need to be performed every 3 months. If no response to medical therapy occurs after 1 month, surgery should be considered.
Ferretonin: There is an even better response to the above treatments when combined with an injection of Ferretonin (slow release melatonin) every 3-12 months.  Ferretonin helps fur regrown more quickly and seems to resolve many other issues in afflicted ferrets.

Why do ferrets get adrenal disease?

Adrenal gland disease is a genetic disorder that appears to be made worse by a combination of two things, neutering/spaying and exposure to varying hours of artificial light instead of natural seasonal changes in the light cycle.
The neuter and spay surgeries are done before ferrets ever get to pet stores.  Spays are done because serious health problems arise in unspayed ferrets that are not bred every year.  Neuters are done to make male ferrets less odiferous and reduce the risk of behavioral problems.
Ferrets are very sensitive to changes in the day length over the course of the year.  The lengthening of daylight in the spring, and shortening of daylight in the fall, sets the pattern for their reproductive cycle. Pet ferrets are usually kept indoors, and are exposed to lights at different times of the day and night, usually without any seasonal pattern.  Without the regular change in photoperiod over the course of a year, they do not have the right triggers for normal hormone production, and the adrenal glands can overproduce sex hormones. This typically happens at 3 years or older but has been seen in ferrets as young as 1.5 years.

New drugs and treatment regimens are being explored across the country and we stay current with cutting edge information to offer you the best possible choices for your ferret's treatments.