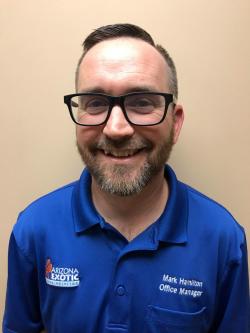 ​Mark spent most of his free time as a child chasing reptiles around northern Arizona and southern California. He joined the U.S. Army after high school which gave him the opportunity to chase reptiles around the southeastern United States, Europe, and the Middle East. Mark has cared for and raised many species of reptiles over the years. Although reptiles are his primary interest, he has a strong passion for all exotic pets. He currently spends most of his free time fishing at Arizona’s desert lakes or photographing rattlesnakes. 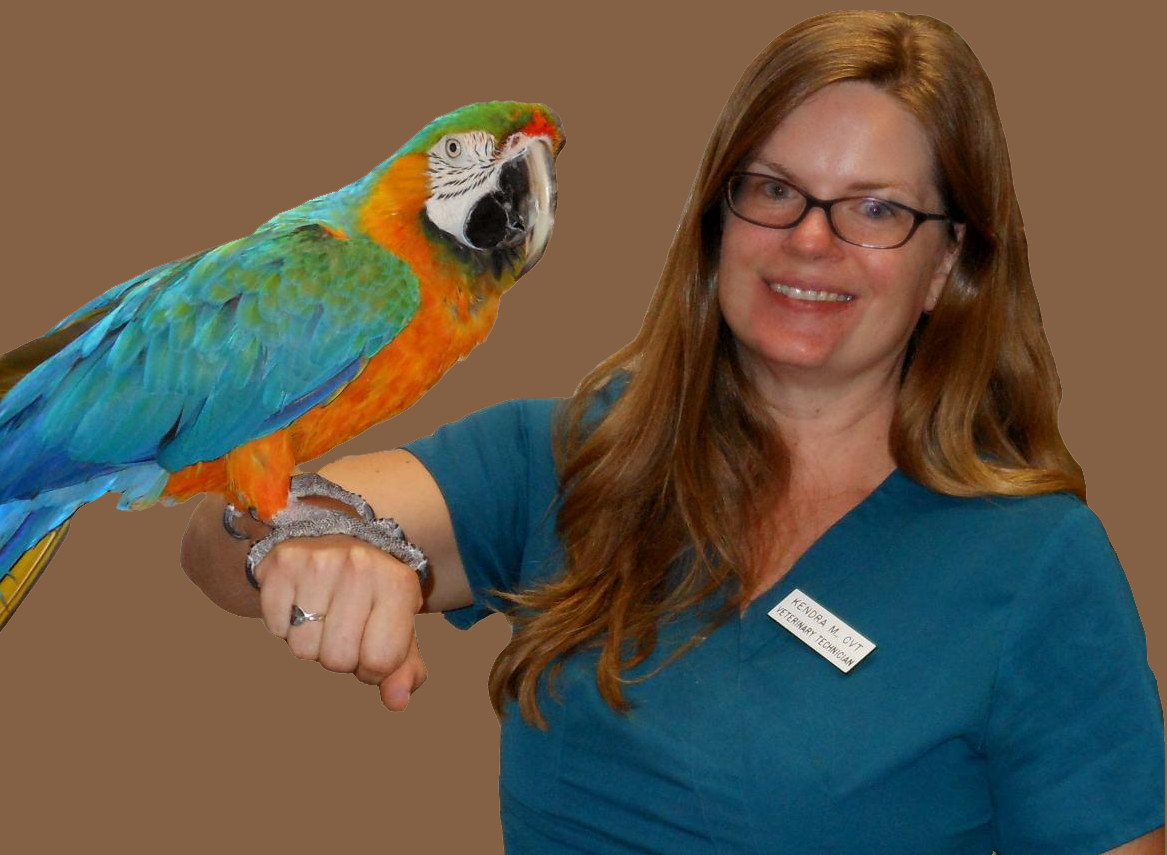 Kendra graduated from the University of North Carolina at Chapel Hill with a Bachelor’s degree in biology and later became a Certified Veterinary Technician. She worked for a veterinary dermatology specialty practice, where she had the opportunity to work with several animals at the Phoenix Zoo. She has also rehabilitated sick and injured raptors and other birds while volunteering at Liberty Wildlife. Her interest in exotic pets and wildlife/zoo animals led her to a career in exotic pet medicine. Kendra’s family includes her daughter Jenna, Cho-Cho the pitbull, Tabasco the cat, Frankie the ferret, and a cockatiel named Trixie. 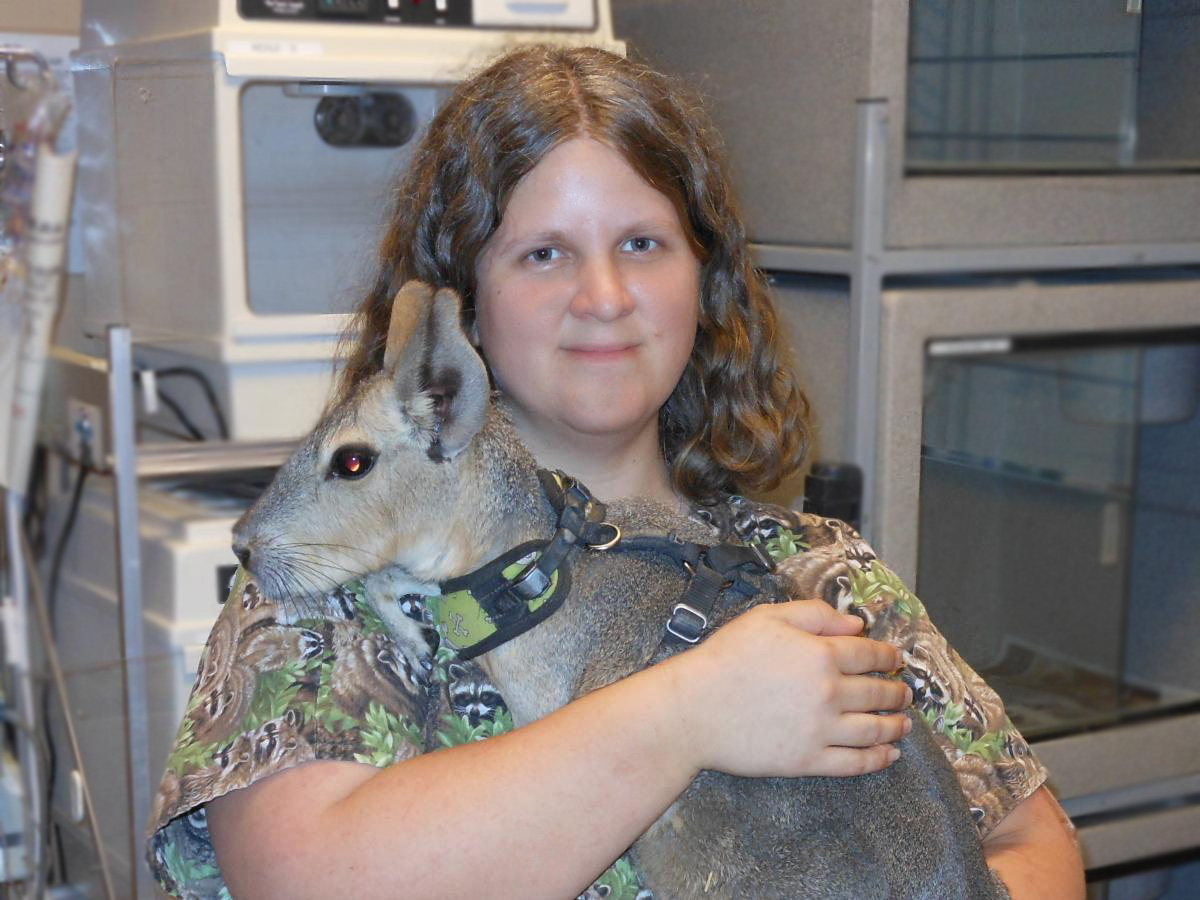 Rebecca has loved all animals for as long as she can remember, and has been working in the veterinary field since 1998. Rebecca followed her passion for working with exotic pets in 2001 and has been working primarily with them ever since. Rebecca earned her Veterinary Technician Certification in 2010. In her spare time she is a volunteer with the Phoenix Herpetological Society and Liberty Wildlife. She also rehabilitates bats for many wildlife groups. She has many exotic pets that she has adopted or rescued over the years, with the most unusual of her kids being a Brush-Tailed Bettong and two Patagonian Cavies. 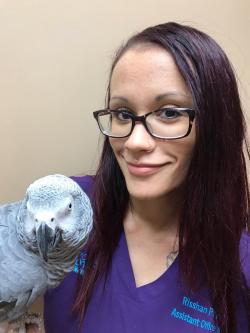 Risshan initially started at Arizona Exotic Animal Hospital in 2012 as a volunteer.  Her love of learning about and caring for exotic pets was clear, and she was hired to be part of the hospital team. She has a diploma in Veterinary Assisting. Risshan’s favorite aspect of her job is giving each patient and client the care and compassion they deserve. She also enjoys spending time at home with her two children, dog, cat, hamster, and woma python. 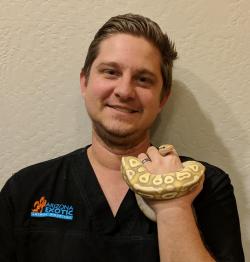 Ben graduated from Mesa Community College in 2015 with an Associates in Animal Science and earned his veterinary technician certification the same year. Ben has lived in Arizona his entire life.  He has 2 snakes, 2 dogs, 2 cats, and 3 Leopard Geckos. In his spare time he enjoys going to the movies, Disc Golfing, and playing Playstation. 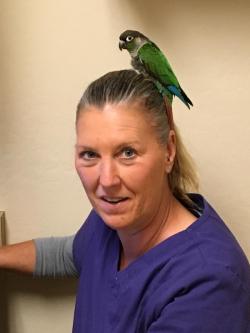 Barb has always had a love for animals even, as a child. In 2010, Barb turned her passion and love for animals into her career by graduating the Vet Tech Institute at Fox College in Chicago as a CVT. Afterwich, she worked at a local Chicago vet hospital primarily with companion animals for eight years. After relocating to Arizona in 2017, she started a small farm with a wide variety of animals including ducks, chickens, pigs, skinny pigs, and of course dogs. In 2019 she was given the exciting opportunity to expanded her career by working with exotics at Arizona Exotic Animal Hospital. Barb finds working with exotics not only challenging but also extremely rewarding. 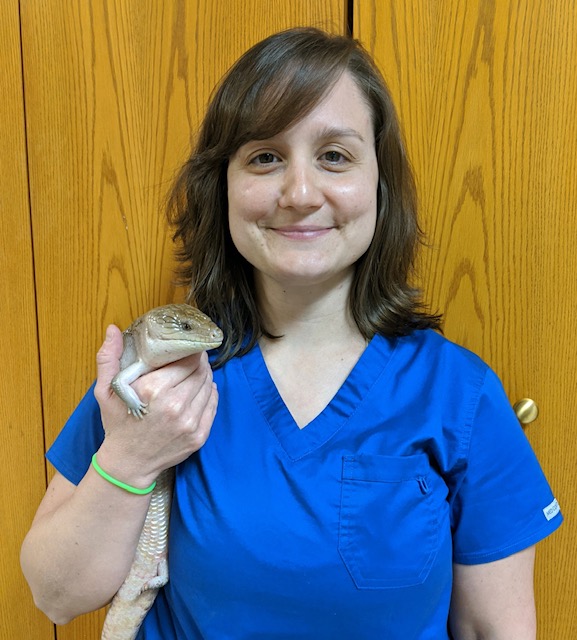 Joy was born and raised in the very small town of Cut Off, Louisiana. She's pretty much as Cajun as they come and is from a family of commercial shrimpers. She moved to Lafayette, Louisiana in 2011 to pursue a career in veterinary medicine. There she was able to get hands on experience in small animal mixed practice, emergency, and specialty medicine. In 2017 she became an RVT. In 2018 she decided to take an even bigger leap and moved to Phoenix to further her career options and became a CVT and landed here. Her family consist of her partner, Jarrod, their two Sulcata tortoises, Batman and Robin, and their two dogs, Babeaux and Lil Momma. In her spare time she enjoys hiking, gardening, playing video games, watching movies, arts and crafts, and she considers herself to be a potato chip connoisseur. 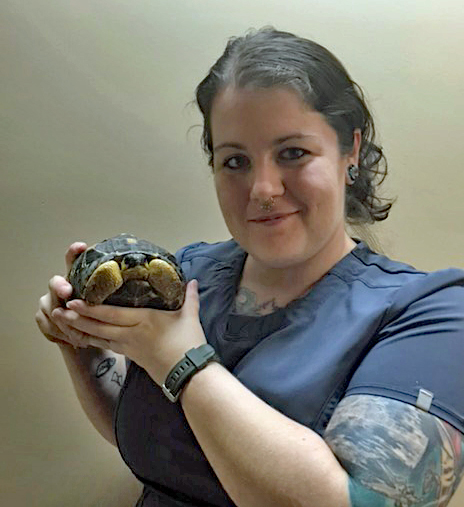 Jessie was born and raised in the Chicago area before moving to Arizona in 2013. Originally, she went to school for fine arts and still creates and sells art but then followed her lifelong passion of caring for animals. She graduated in 2016 from Pima Medical Institute with an Associates in Applied Science. From there she has gotten experience in exotic, shelter medicine, emergency, and general practice before going back to her original love for exotics. She gained her CVT in 2020. She fosters animals in her free time. She currently has 4 dogs (Garrus, Bishop, Inara, and Hamish), a cat (Hawke), a ball python (Sithis), a salamander (Ackbar), and many fish. 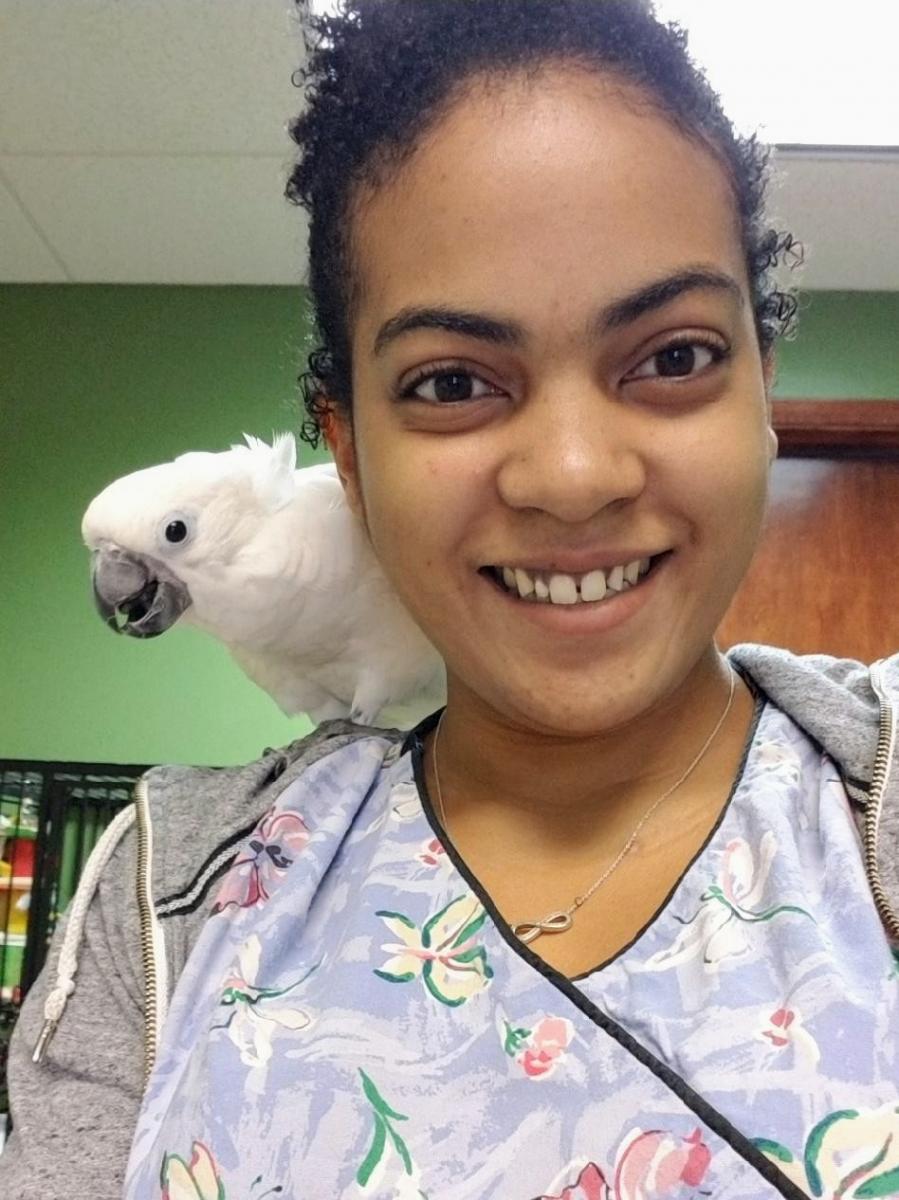 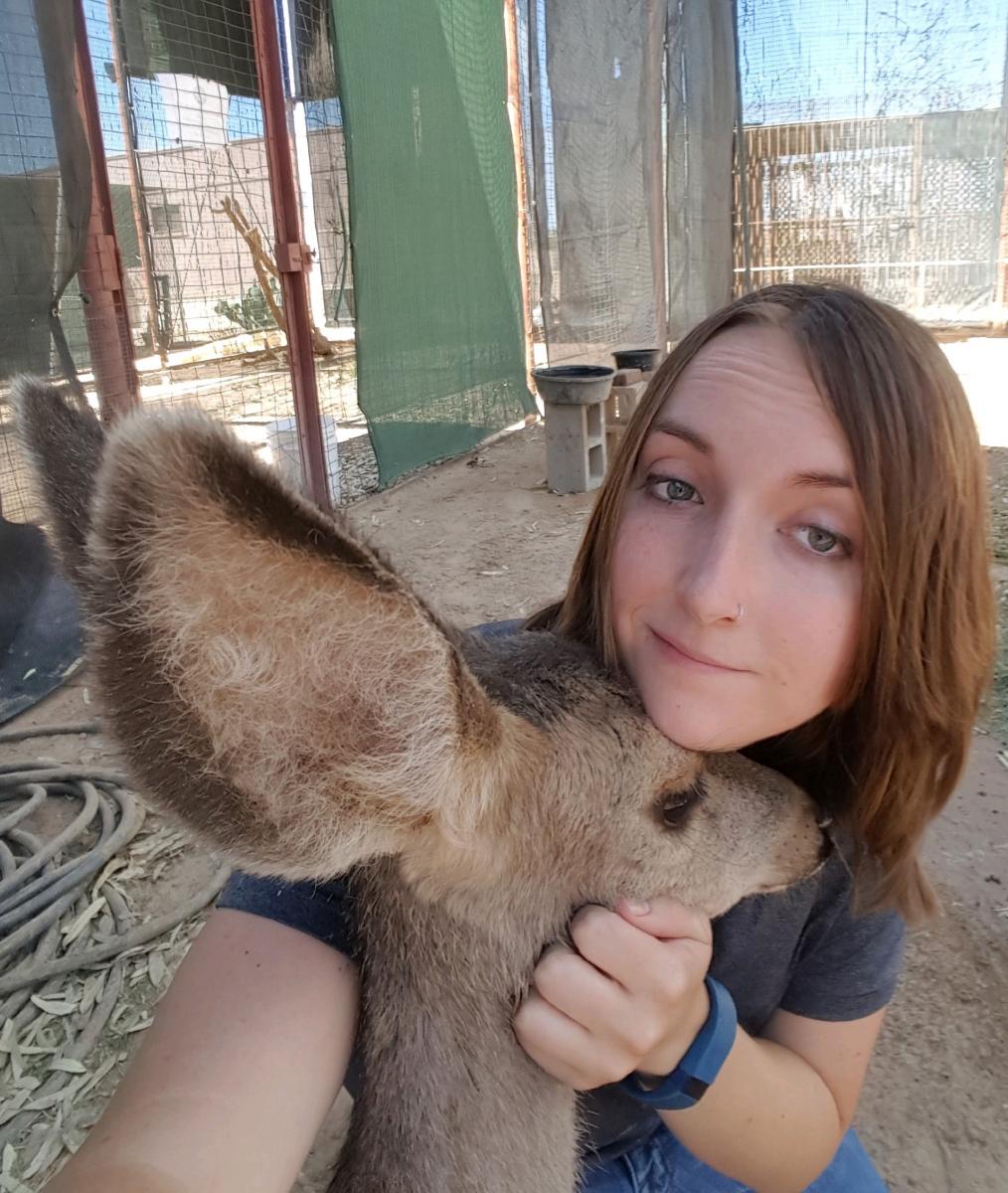 Tegan has always wanted to work with animals and now it is all she does! She has owned and cared for a wide variety of animals throughout her life. Reptiles and wildlife have always been a favorite. Tegan has a degree in Wildlife Sciences and is continuing her education to further assist animals in need. When she is not working, she enjoys spending time with her family and her dog. 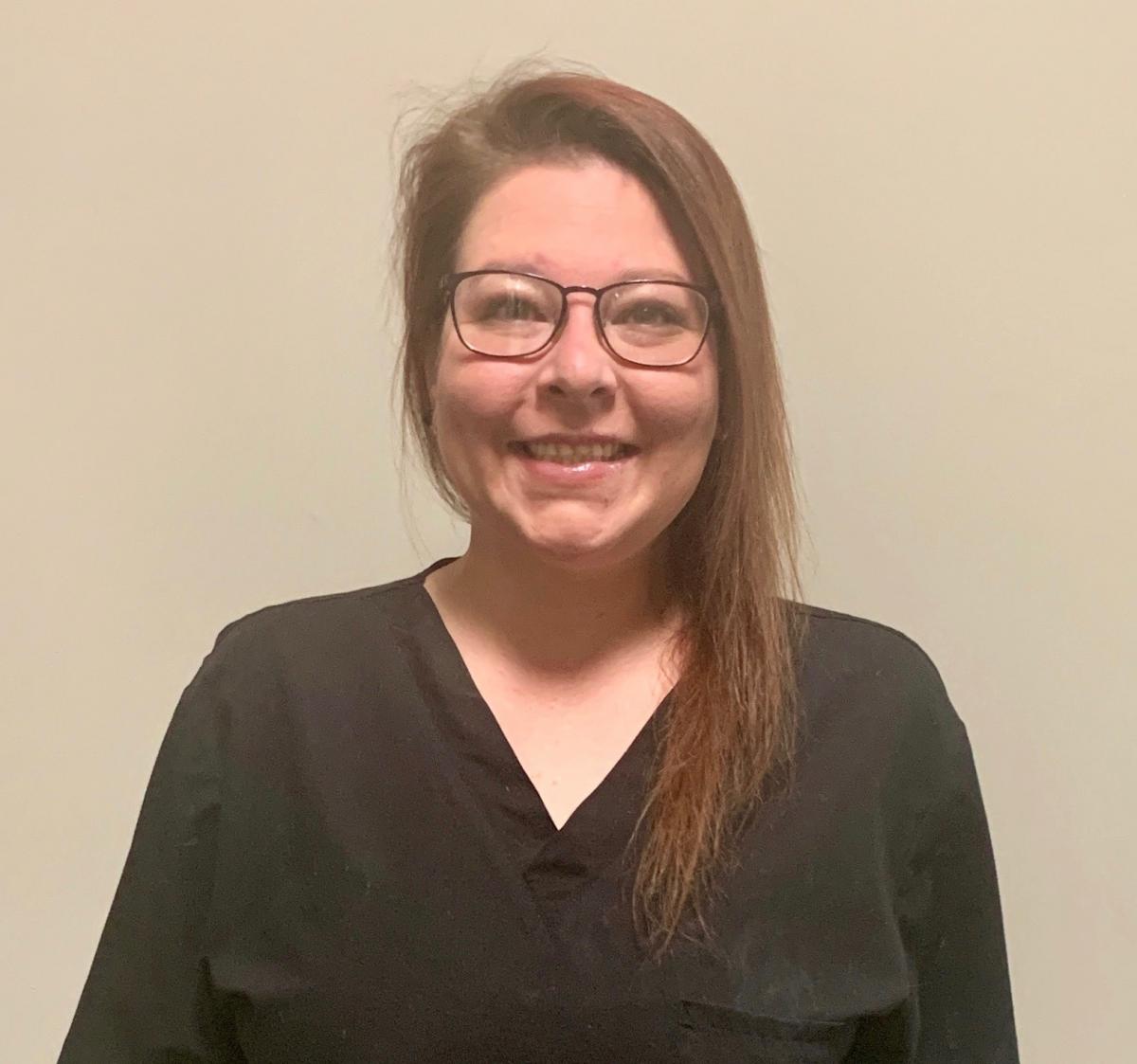 Natasha has been a Tucson resident since 2003. She attended the Univeristy of Arizona where she earned a Bachelor's Degree in Veterinary Medicine with a Minor in Chemistry. She has worked in the veterinary field since 2008. In addition to the MANY animals that she has met and loved over the years, Natasha has her own animal family consisting of her leopard gecko, Belinda and 2 rescued cats Coupe deVille and Vee. Aside from her passion for the four legged, winged, furry, and scaly, Natasha loves to read, watch movies, listen to music, and travel. 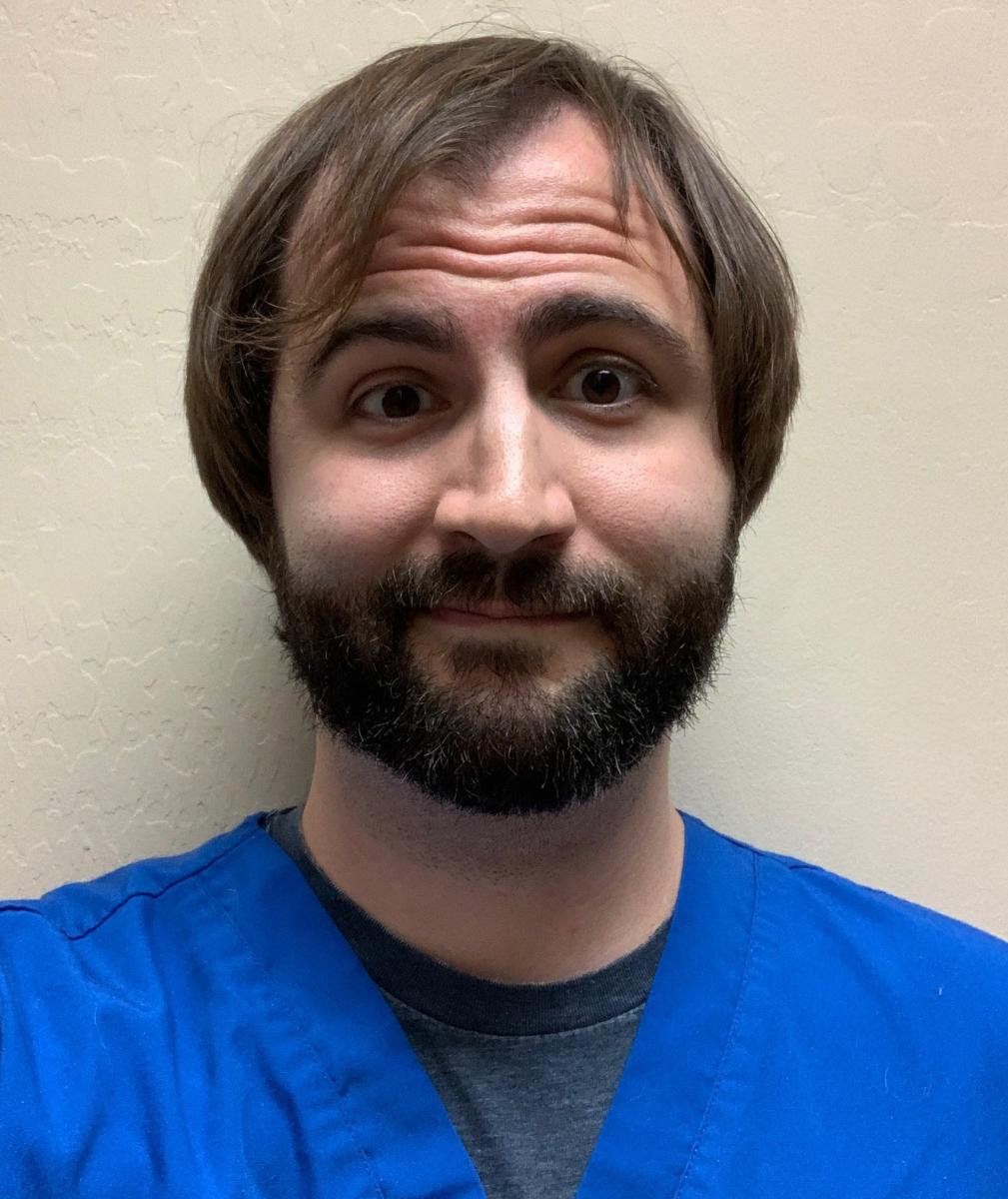 Brandon was born in Phoenix and grew up in Mesa. He graduated from Red Mountain High School in 2009, and later graduated from Northern Arizona University in 2014, obtaining a BS in Biology with a focus on Chemistry. Brandon has always had a long-term goal of becoming a veterinarian. He started as a receptionist at a local vet clinic in college, working and training his way up until he became a technician. He hopes in the near future to be admitted to vet school to continue his pursuit of becoming a veterinarian. 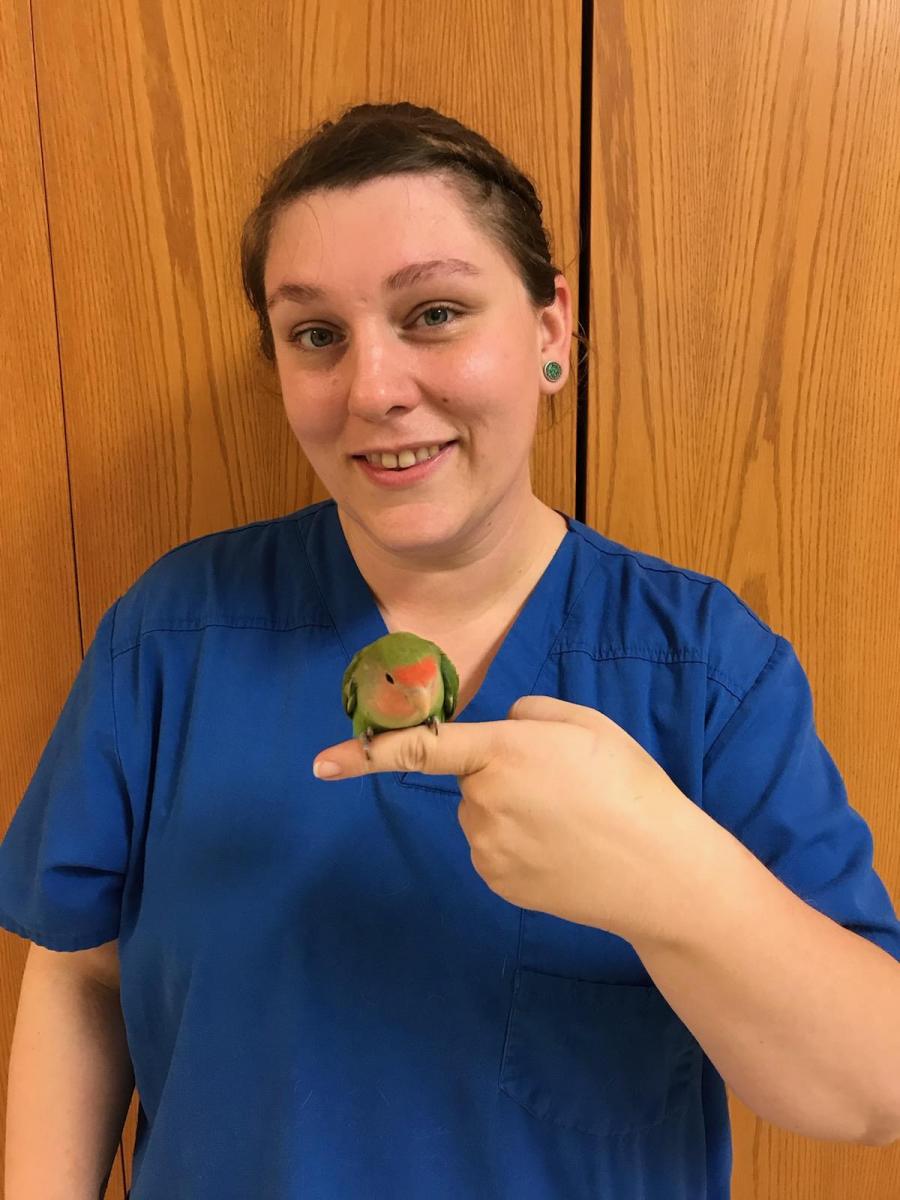 Cora has been in the veterinary field since 2013.  She grew up with a strong passion to help animals, from ursing pigeons back to health to fostering those in need.  Over the years that drive never dwindled and she was able to turn that passion into a career while making her dreams come true. Cora currently shares her dreams with her Chihuahua names Jambi, a cat named Phish, a hedgehog named Quill T and a Lovebird named Indi. 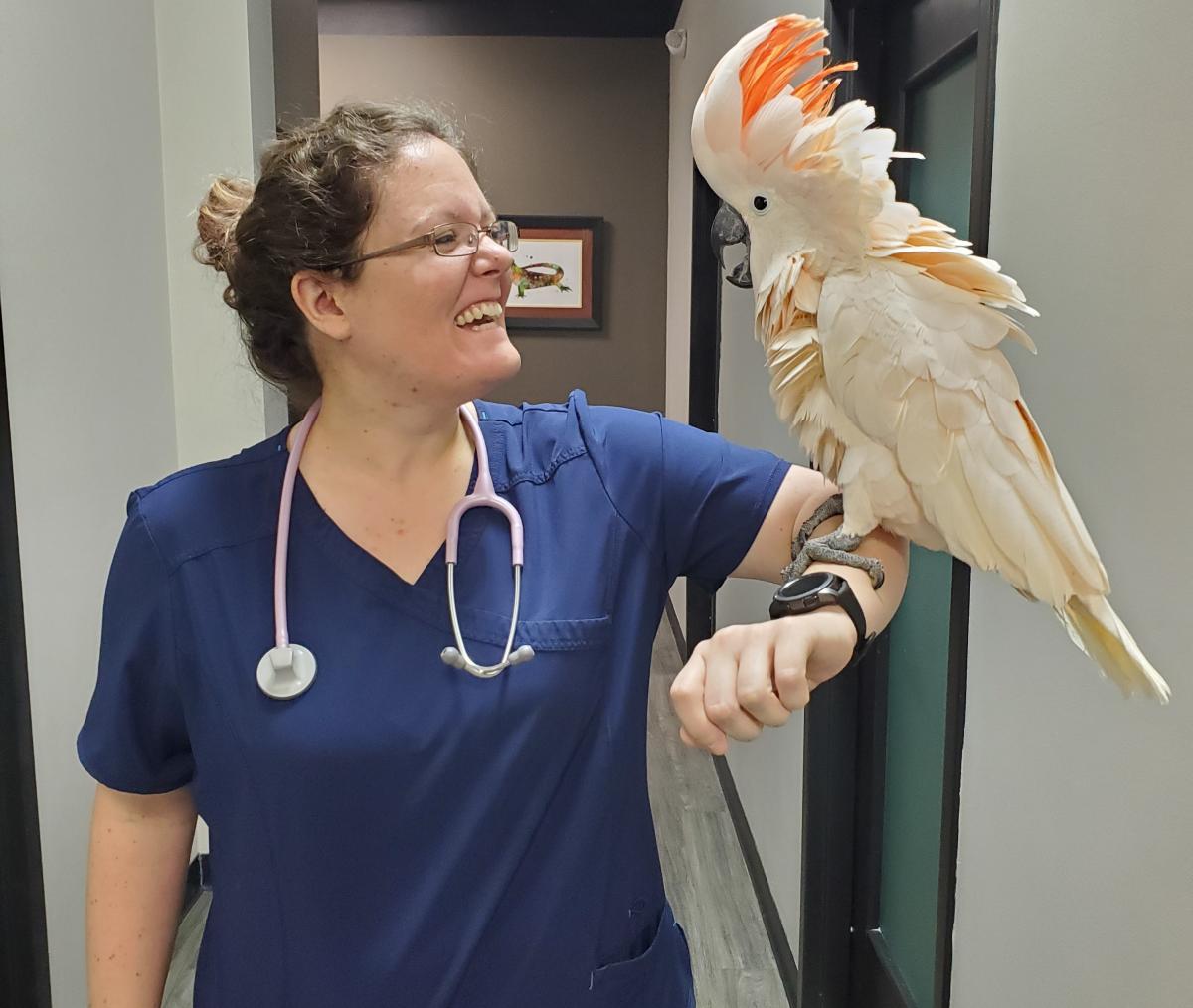 Kristy is an Arizona native and loves Tucson. The love for animals started when she became a groomer at the age of 17. Kristy then went to Pima Community College where she graduated in 2014 with an Associates of Applied Science in Veterinary Technology. From there, she became a technician in the dog and cat practice for 8 years. Her love for her ferrets has led her to the exotic animal practice. Kristy is currently going to University of Phoenix to receive her Bachelor of Science in Management in hopes of managing a veterinary hospital one day. 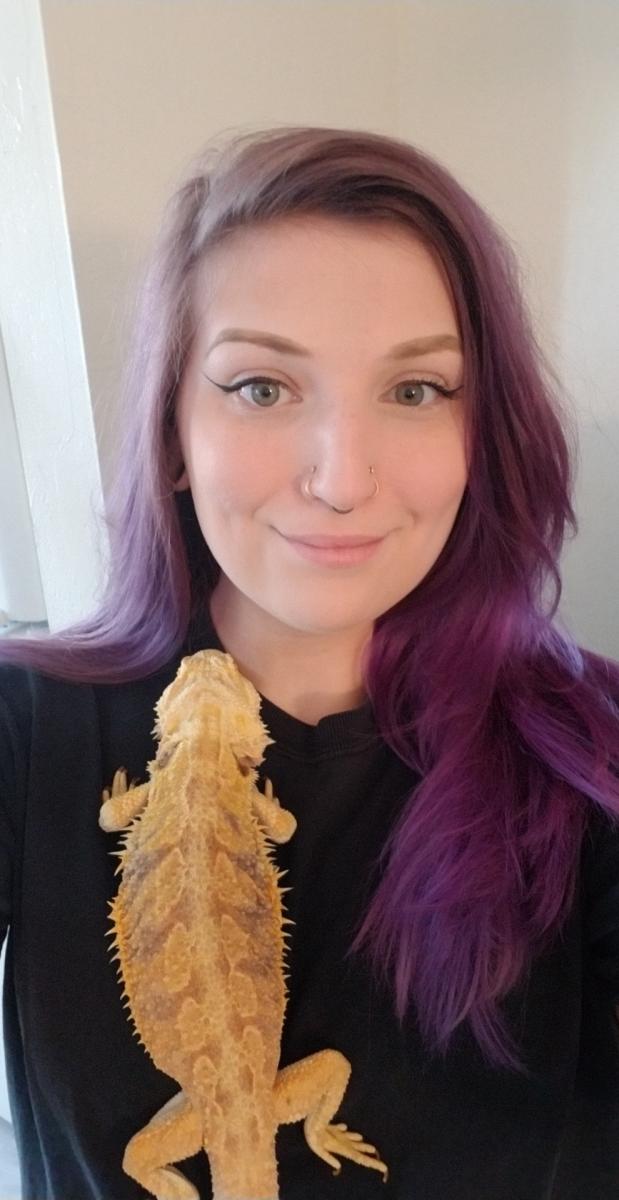 Madison has been around animals all her life. She has owned reptiles since she was a child and now keeps over 12 exotics pets. She plans to enroll in school and become a CVT to work with reptiles. When she is not at work she enjoys spending time with her fiancè, David and her reticulated pythons, Burmese python, boa, ball pythons, frogs and leopard geckos as well as her dog Honey and cat Stella. 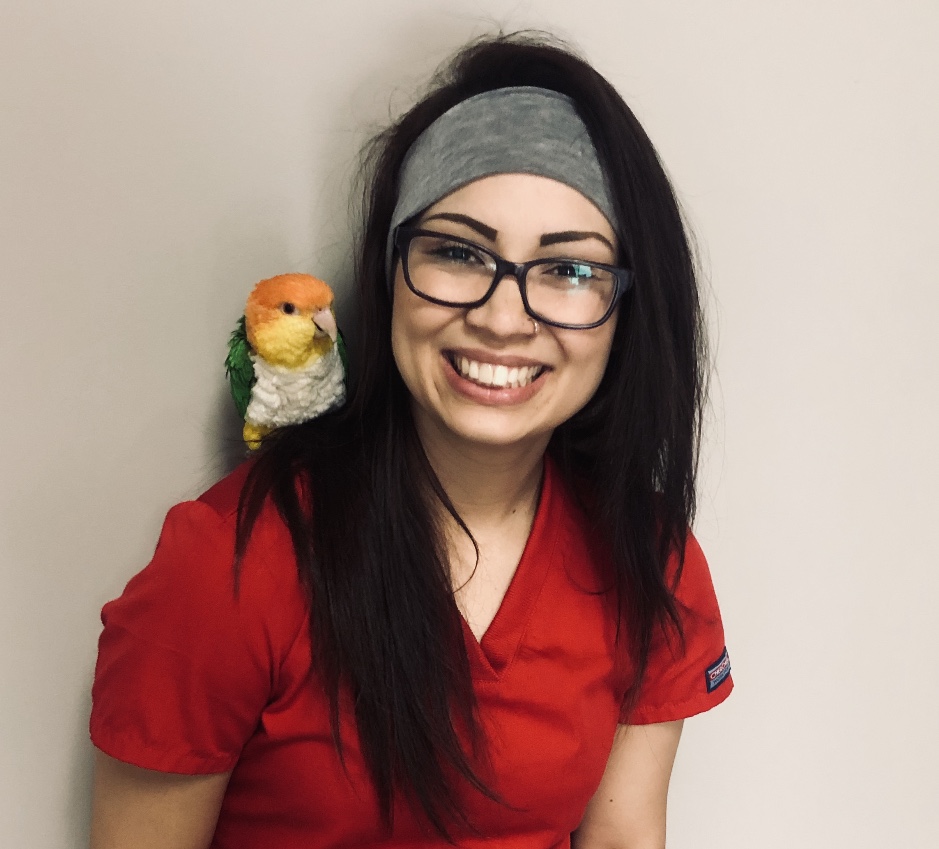 Sierra is a Tucson native and loves being surrounded by the beautiful mountains and cacti.  She is currently working on her Bachelor of Veterinary Science degree. Her passion has always been with reptiles, which has led her to her dream of becoming an exotic animal veterinarian. Sierra has a bearded dragon named Dratini and a rescue puppy named Hades whom she loves to go hiking with in her spare time. 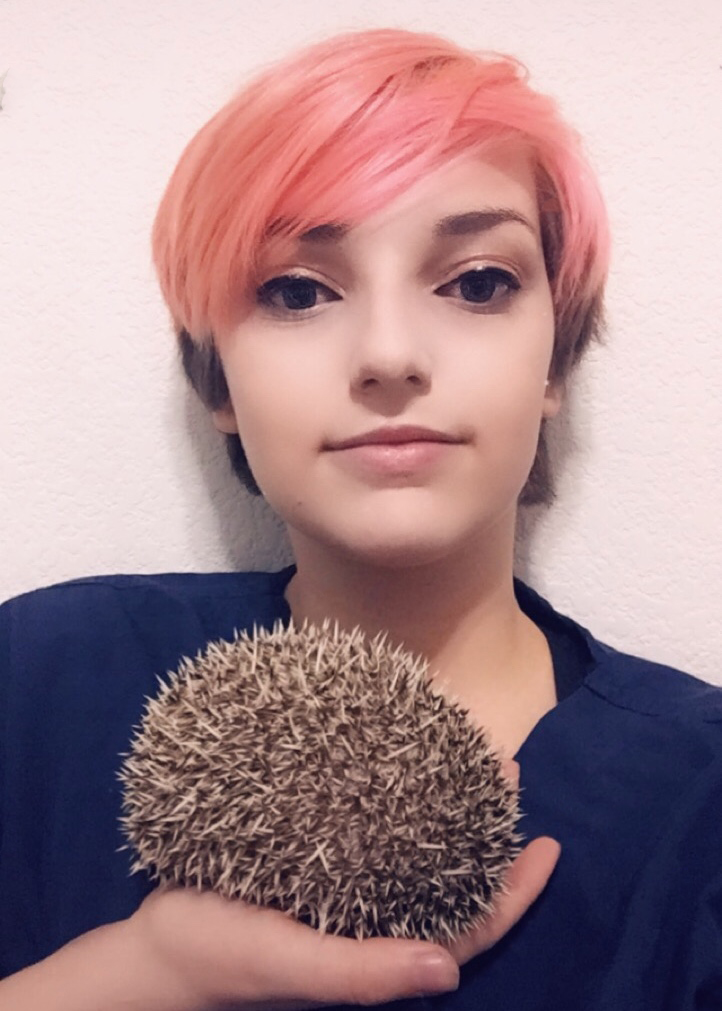 Ray has always had an interest in the animal field since she was young. When she got her first hedgehog she fell in love with the world of exotics. Ray earned her degree for Veterinary Assistant through Pima Medical Institute and came to our office starting as a client. She wants to continue helping animals in need as much as possible and plans on continuing her education to technician and possibly further in the future. 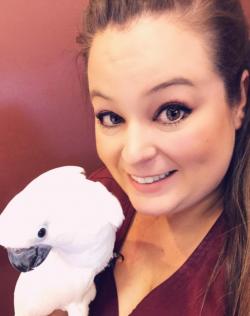 Lisa's had a love for animals ever since she was a little girl. She always knew she wanted to work with animals. Lisa began working with exotics when she lived in California. She continued her passion for working

with exotics when she moved to Arizona and found us in 2018. She lives at home with her husband, two dogs (Blue and Mac), her bearded dragon, Budra and her Sulcata, Charger. Ron works tirelessly not only here at Arizona Exotic Animal Hospital doing PR and maintaining hospital inventory. He also works part time at The Handlebar in Apache Junction bringing joy to it's patrons. He has 2 kids, Bill and Fred, a beautiful wife, Margaret and a cat named Waldo.